Jeremy Lock, the second three time winner of the prestigious title Military Photographer of the Year (2002, 2005, and 2006) was born in Almagordo, N.M. on 19 Dec. 1970. Sergeant Lock got his start in photography working at Vandenberg AFB, CA, as an aerial photographer. In 1999, he received his degree in photojournalism at Syracuse University where he graduated at the top of his class. His work has appeared in numerous major media publications world wide including Time, The New York Times and The LA Times. In 2002, he worked in collaboration with 125 of the world’s leading photojournalists on a book entitled, "A Day In The Life Of The United States Armed Forces." Additional books where his work is featured include, "NYC Life Going On" and "The War in Iraq." Recently, he worked as a New York Life photographer on a documentary for PBS title, "Slavery And The Making of America." Over his nine year career, he has bee the recipient of the Bronze Star Medal, Air Force Air Medal, Aerial Achievement Medal, Joint Service Commendation Medal, Air Force Commendation Medal, Air Force Joint Service Achievement Medal, Air Force Achievement Medal, and the Army Achievement Medal. Lock currently resides in Charleston, SC where he serves as a member of the 1st Combat Camera Squadron, Charleston AFB, SC. 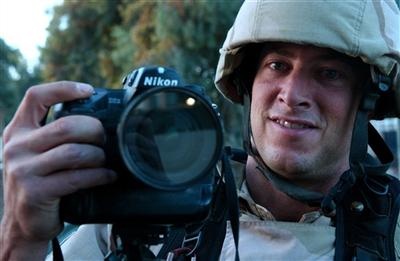