It may be a safe assumption that the city of Kahn Bani Sahd, Iraq has never seen baseball before. It is also a certainty that America has never seen the Kahn Bani Sahd brand of ball. The “field” was small, smaller than a basketball court. But, perhaps, a larger obstacle for U.S. Army Specialist Timothy McClellan and others of Charlie Company 1-12 was that the “field” also served as the parking lot for a fleet of tanks and Bradley Fighting Vehicles. Fly balls were different here as well. Here, when an errantly hit ball soared over the fence, it landed in a crowd of a different sort - full of armed men in enemy territory. Like a scene from the movie Sandlot the soldiers would kick dirt and curse when their last baseball cleared the wall and smacked pavement on the other side.

We were getting ready to go out on a combat mission, when the boys decided to have an impromptu game. It was quite a sight, to be sure. The First Sergeant walked out of the chow trailer with a sausage patty stuck on a fork and sat next to a military working dog perched on a tank. They both watched earnestly, as the boys from Charlie Company scavenged for rocks. Since they lost their last proper baseball days before, they made use of Iraq’s abundant rock source. As the rock made contact with the bat, the deafening “clank” prompted all eyes look toward the heavens. I was home again, apple pie and baseball.-Stacy Pearsall 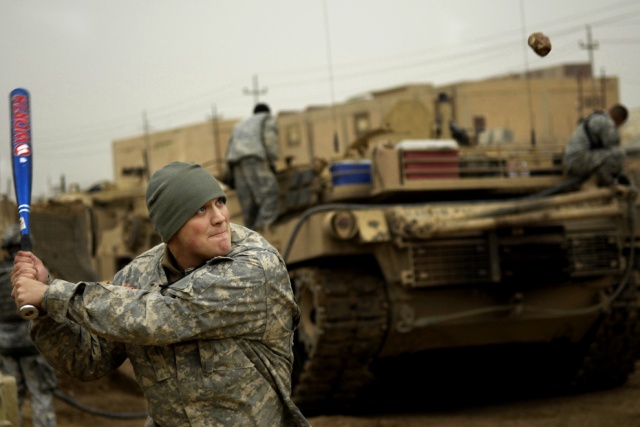