%My video partner, Dawn Anderson, and I were set to leave Afghanistan for Oman on Jan 18th after about three weeks in country, but one night I was talking to some of the medical personnel at the chow tent and I learned of this Medical Civil Action Program (MEDCAP.) I was instantly interested and phoned my lieutenant in Oman to see if we could stay a few extra days and catch the first C-130 on the 22nd. He agreed. Dawn was displeased with me, but quickly realized when we arrived in Kapisa on the 21st, that this was something extraordinary which needed to be covered. We departed Bagram at about 5:00am, which meant we had to show up to the airfield around 3am. We boarded Ch-47 helicopters along with the medical personnel and flew an hour to the remote village of Kapisa. We landed in a farmer's field and were greeted by Army Civil Affairs personnel and village elders. Then the troops quickly went to work setting up tents and by 8am, they began seeing their first patients.%

The people of this village and the surrounding communities were amazing. They traveled by foot or by donkey for several miles on this extremely cold morning to receive the free medical care. I was amazed at how beautiful and how young some of the children seemed who would often show up with out a guardian. They would huddle in groups as they waited in line. I recall one boy who seemed no older than eight who arrived on a donkey to bring his infant sister to this make-shift clinic. She had terrible burns on her face. I also recall another young boy, approximately five or six, who had walked his sick cow to the vet. But it was the women's tent where I ended up spending most of my time.

%The men were divided into two lines, one to receive dental care, and one for medical care. But the women, who were wrapped in beautifully colored fabric and most were carrying infants, all went to the same tent regardless of whether they needed medical or dental care. I wondered if these young girls were their mothers or their siblings. They would crowd the entrance of the tent trying to push their way in or be next in line. It got so bad that one female Army soldier had to stand at the entrance with a stick to block them from pouring in. They would plead with her to be next in line and it was obvious to me that they were in desperate need of this medical care. Outside the tent, most of the women had to be completely covered by their burquas, but inside the tent they were allowed to remove them and show their faces. Some didn&#146;t remove them at all, but simply pulled it up from the bottom so the doctor could check them out. But others would remove them and when I would ask them if I could take their photo, they would smile proudly and nod. I was expecting them to be timid, but infact they were very proud that someone wanted to take their photo. I was filled with pride that they would allow me to not only see their faces, but also photograph them.%-Cherie Thurlby 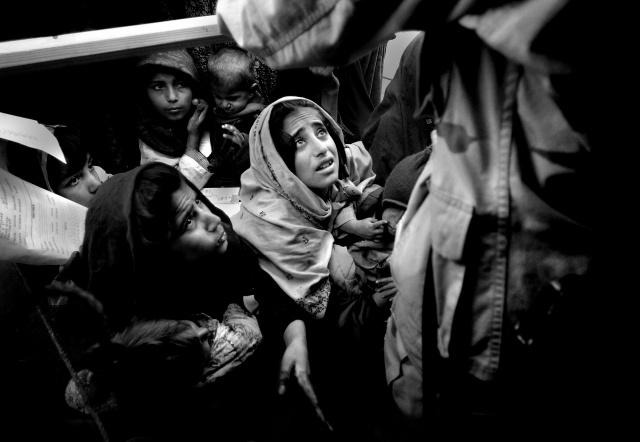