%Baghdad at night can be spooky. There’s no electricity, so everything goes dark. During the day, there is this massive press of bustling, messy, chaotic life all around, and then, a few hours later, it’s all gone and the streets are completely deserted. Sha’ab is a poor neighborhood, very crumbling and dilapidated, so at night it seems like even more of a wasteland than the rest of the city. You’d think it was a total ghost town, except in one house out of a hundred you might see light shining out from a crack under the door where, inside, a family was huddling on the floor around a kerosene lamp.%

When we did night patrols we wore our Night Optical Devices, generally known as NODs. When you are looking at the world through nods everything has a slightly airbrushed, fuzzy quality, as if it had been sketched in charcoal.

The Platoon leader and his men had become agitated when they began receiving reports from locals that a teenage girl had been raped by a group of local gang members. He had devised a plan of venturing out into the night to a local pool hall to goad the alleged perpetrators into a confrontation over the incident. Much like the scene in a Wild West movie, he entered the hall and brazenly scattered the balls all over the pool table. The locals didn’t bite on the provocation; however, the message was surely heard loud and clear. At higher levels, the talk may have been about reconciliation and engagement, but out with the grunts, the laws of the jungle still applied.- Mike Pryor 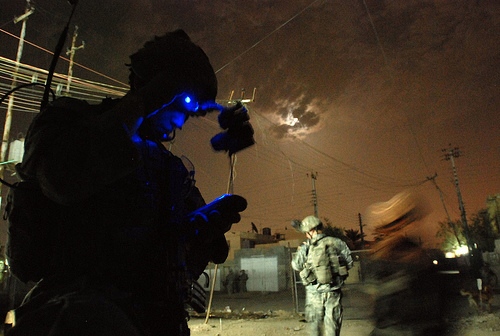