This was taken of Pvt. Zachary McDaniel and Pvt. Shane Irwin of Charlie Company of the 101st Airborne Division as they walked along a contaminated canal outside Sadr City. They were providing security for a U.S. hired forensics archaeology team searching for Saddam-era mass grave sites. Located in a landfill, the water’s unnatural hue is the result of years of pollution from trash, human bodies and animal carcasses.

No mass graves were found on that day but we came across an area in the landfill about the size of a football field filled with pieces of scrap metal such as car parts and bicycle handlebars sticking out of the ground. When I inquired as to why these pieces had been placed like this the interpreter told me that they were used as markers. He explained that they marked the graves of babies.

After returning to camp after a 12 hour day in the fly infested dump, the soldiers headed back to camp for food, fuel and sleep. Several hours later the same soldiers were out on the streets of Sadr City on patrol. Ten minutes later the second truck in our convoy was struck by an EFP (explosively formed projectile). The round entered on the passenger side through five inches of armor taking off the legs of the passenger and then the legs of the driver then exiting five more inches of armor. The soldiers of the 1-33 reacted very quickly and had the injured back on base within eight minutes. Both of the wounded are still recovering and are medically retired. - Russell Klika 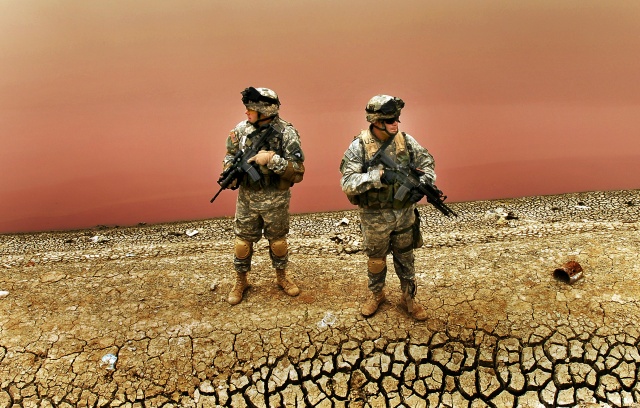